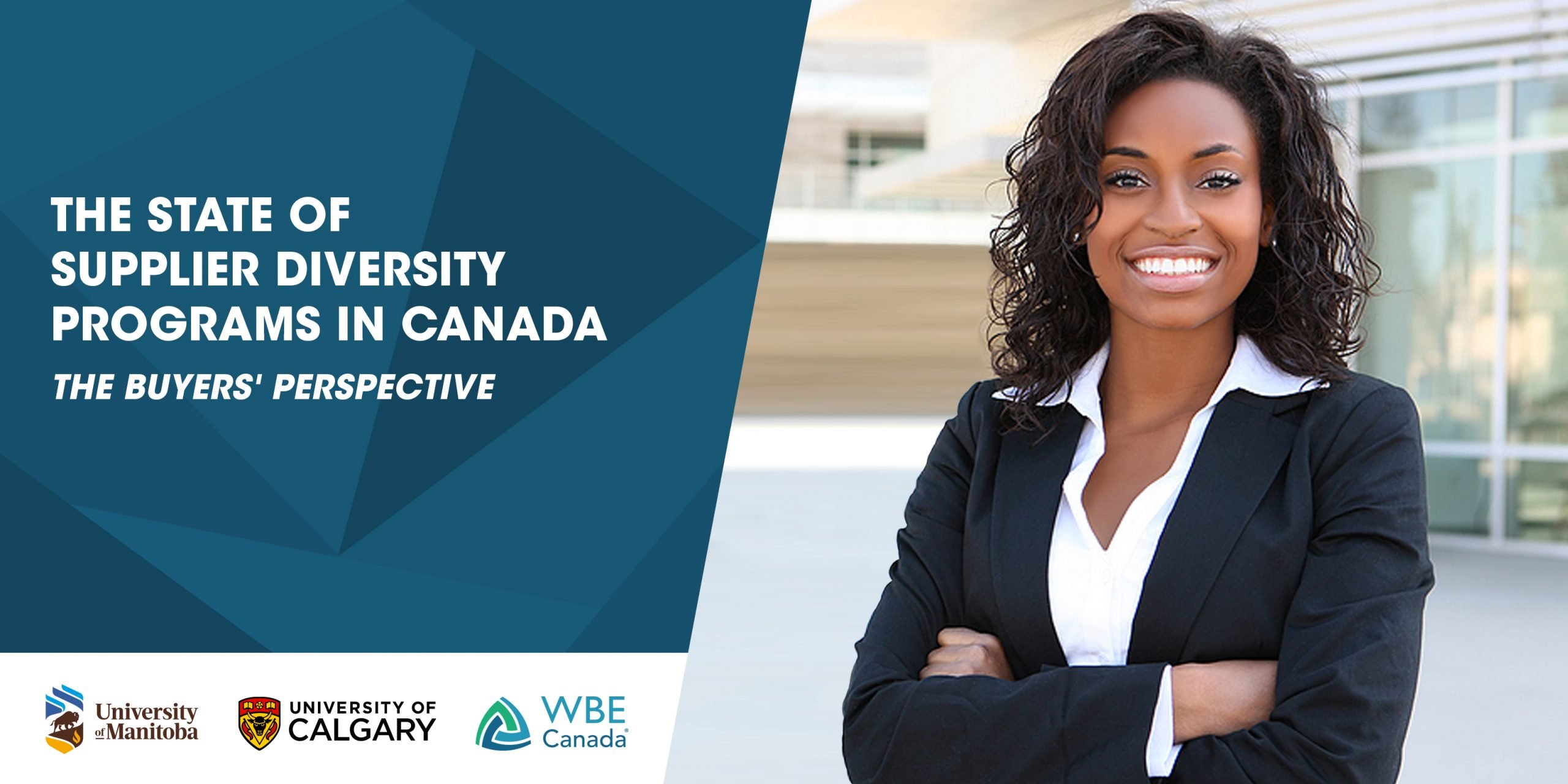 WBE Canada, University of Manitoba and University of Calgary are happy to announce the release of the new report “The State of Supplier Diversity Programs in Canada: The Buyer’s Perspective”.

In Fall 2020, WBE Canada and experts from the Universities of Manitoba and Calgary conducted a national survey on the status of supplier diversity (SD) in Canada. The survey focused on the barriers to SD programs and the facilitators and motivators needed to move SD forward.

Participating organizations reported varying degrees of SD, including those with full or partial programs, those in the initial stages of developing an SD program and those who currently have no formal program. These organizations were asked a series of questions on the primary goals of their SD program, motivators and facilitators, importance of Canada’s certifying councils, barriers and status of internal reporting of diverse spends, including from Tier 2 suppliers.

The results of this survey present a better understanding of where SD fits within the strategies of Canada’s large corporations and how Canada’s public-sector post-pandemic recovery efforts need to include SD as a strategy to ensure continuing and long-term economic growth. Utilizing the data gathered from this research is immensely helpful as WBE Canada continues to develop the tools and resources to help Canada’s private-and public-sector organizations build SD programs, improve their internal reporting and find qualified suppliers needed to expand and diversify their supply chains.

This report follows the release of the first report ‘The State of WBE Certification in Canada: The Suppliers’ Perspective’ which was published in June 2021.

“Once again we see that large Canadian businesses and those with direct ties to American companies (as opposed to small firms and organizations without an American connection, including government procurement agencies) are more likely to have complete SD programs.” said Paul Larson, Ph.D., CN Professor of SCM, University of Manitoba

“Yet another proof that there’s still much more work to be done in supplier diversity in Canada. While councils are doing a good work, much more is needed. Supplier diversity could benefit from support of more players like procurement associations, governments, universities and industry associations.” Silvia Pencak, M.A., President & CEO, WBE Canada

About University of Manitoba

The University of Manitoba is western Canada’s first university, established in 1877. Its campus is situated on original lands of Anishinaabeg, Cree, Oji-Cree, Dakota and Dene peoples, and on the homeland of the Métis Nation. It is Manitoba’s only research-intensive university, and one of Canada’s top research institutions. The University serves more than 29,000 undergraduate and graduate students. From 2006-2009, its supply chain management department developed and wrote a new C.P.P. curriculum for the Purchasing Management Association of Canada (PMAC). Since then, the C.P.P. has been re-labeled SCMP, and PMAC is now Supply Chain Canada.

About University of Calgary

Established in 1944 as the Calgary campus of the University of Alberta, the University of Calgary became a separate autonomous university in 1966. Situated near the Bow River on the traditional territories of the people of Treaty 7 region of southern Alberta, the campus hosts 14 faculties, 55 departments, and 85 research institutes and centers. Twelve research centres are hosted within the Haskayne School of Business including the Canadian Centre for Advanced Leadership in Business, the Hunter Center for Entrepreneurship and Innovation, and the Canadian Centre for Advanced Supply Chain Management and Logistics.

Maude Parisseau from BDC provided this video testimonial at the conference to discuss the benefits of Corporate Membership with WBE Canada. “For us, it was really important to become one because it’s an extension of our mandate,” she said. “BDC is here to support Canadian entrepreneurs. It allows us to meet with different entrepreneurs, to learn more about them, their passion, and also to be able to meet with other organizations and corporations that do encourage other WBEs, and to le… END_OF_DOCUMENT_TOKEN_TO_BE_REPLACED

Michelle White from Today Living Group provided this video testimonial at the WBE Canada 2018 Annual Conference to discuss the benefits of Certification with WBE Canada for women-owned businesses. Michelle White identifies access to the corporate buyers as the biggest benefit of WBE certification. Instead of talking to gatekeepers, you get to connect with the buyers and corporate professionals who are willing and ready to help you navigate the supply chain. To learn more about certificatio… END_OF_DOCUMENT_TOKEN_TO_BE_REPLACED

“WBE Canada helps a boutique-sized law firm, like Walker Law, get in the room with other larger suppliers that otherwise might not know about them or might not realize what their capabilities are. They recommend that women-owned businesses be certified to get the chance to connect with corporations who are looking for diverse suppliers they wouldn’t otherwise have access to. That kind of partnership, community and mentorship opportunities are a huge benefit WBE offers as well.”… END_OF_DOCUMENT_TOKEN_TO_BE_REPLACED