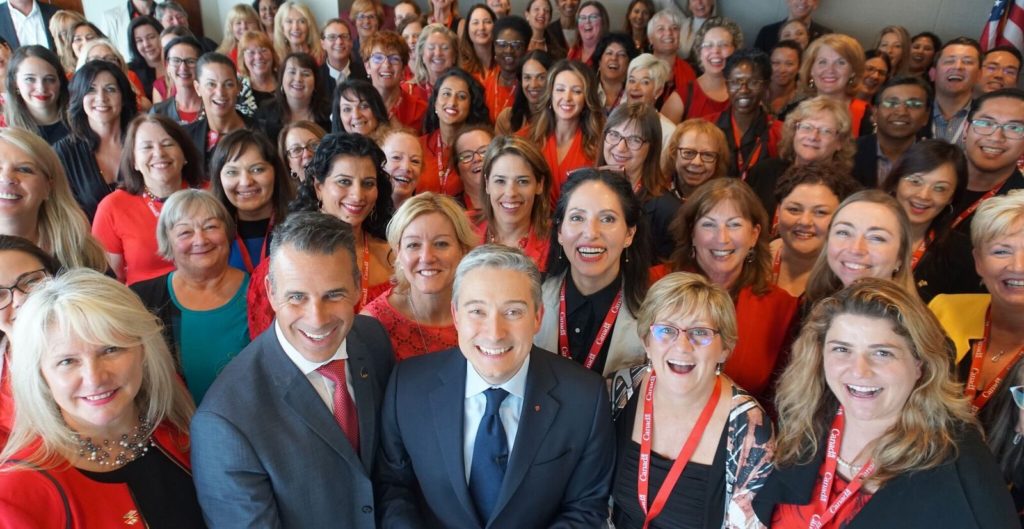 This year’s historic trade mission to the USA was a major success. It not only was the largest trade mission ever, but after 20 years, a Canadian Minister joined the delegation and personally supported Canadian businesses and connections with US corporations.

Following is our open letter to the Honourable Minister Champagne to thank him for his support of Canadian women owned businesses.

In addition, I would also like to extend our gratitude for your time spent with various corporations, regional partners and indeed WBE Canada while attending WBENC and most importantly, your support of Canadian Women Business Enterprises (WBEs) during the trade show portion of the conference. I hope you came away as impressed as we continually are at the business acumen and commitment of these women entrepreneurs who are not only leading their own businesses but actively working together towards equality in the corporate and public sector.

On behalf of WBE Canada I would like to acknowledge your powerful and focused message shared with attendees at this week’s conference and extend our sincerest appreciation for your recognition of WBE Canada during your keynote address on June 21st, 2018.

WBE Canada’s mission is to advance economic growth across Canada through certification, promotion and development of women-owned businesses. We are encouraged and indeed strengthened in our efforts by the Government of Canada’s commitment to advocating and promoting women in business through access to capital, access to markets and support of networks such as WBE Canada.

We would also like to extend our appreciation to the teams that made this trade mission possible – Josie Mousseau, Lynne Thomson and Joelle Midy from Business Women in International Trade, Line Chabot and Anne Cascaden from The Canadian Consulate in Detroit as well as Jimena Guild and rest of your Communications Team for their support for businesses during WBENC National Conference.

Thank you for your support as we expedite the growth of Canadian Women Business Enterprises (WBEs).

“WBE Canada helps a boutique-sized law firm, like Walker Law, get in the room with other larger suppliers that otherwise might not know about them or might not realize what their capabilities are. They recommend that women-owned businesses be certified to get the chance to connect with corporations who are looking for diverse suppliers they wouldn’t otherwise have access to. That kind of partnership, community and mentorship opportunities are a huge benefit WBE offers as well.”… END_OF_DOCUMENT_TOKEN_TO_BE_REPLACED

Maude Parisseau from BDC provided this video testimonial at the conference to discuss the benefits of Corporate Membership with WBE Canada. “For us, it was really important to become one because it’s an extension of our mandate,” she said. “BDC is here to support Canadian entrepreneurs. It allows us to meet with different entrepreneurs, to learn more about them, their passion, and also to be able to meet with other organizations and corporations that do encourage other WBEs, and to le… END_OF_DOCUMENT_TOKEN_TO_BE_REPLACED

Michelle White from Today Living Group provided this video testimonial at the WBE Canada 2018 Annual Conference to discuss the benefits of Certification with WBE Canada for women-owned businesses. Michelle White identifies access to the corporate buyers as the biggest benefit of WBE certification. Instead of talking to gatekeepers, you get to connect with the buyers and corporate professionals who are willing and ready to help you navigate the supply chain. To learn more about certificatio… END_OF_DOCUMENT_TOKEN_TO_BE_REPLACED